Ok, I love old fashioned s'mores.  You know, the yummy perfectly golden cooked marshmallows over a campfire between two graham crackers and three rectangles of Hershey's chocolate.  We've tried all different kinds of options for s'mores, but they just don't quite make the cut.  We've used Peeps instead of marshmallows.  We've tried Rolo's and Reese's peanut butter cups.  We've tried square marshmallows and the jumbo ones.  I love the off brand, cheap marshmallows the best.  None of these options quite match up, though! 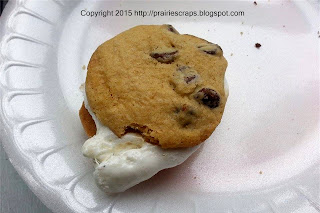 Sooo..... this weekend, while we were camping, we went about making our traditional, only-way-to-eat s'mores as usual!  Then, for whatever reason, I decided that I would try my perfectly cooked, off-brand marshmallow between two homemade chocolate chip cookies!  Oh, my!! We now have a competitor to the original, traditional s'mores!  You don't even need the chocolate!  The chocolate chips melt with the hot marshmallow and it tastes so yummy!!!  Warning, you may have to eat several of these, though, which makes them not so healthy, but happiness created by eating them, may overrule the calories!  (Maybe!)
Posted by Prairie Scraps at 9:03 AM No comments:

Email ThisBlogThis!Share to TwitterShare to FacebookShare to Pinterest
Labels: Life on the Prairie, Recipe

On the way home from town at 1pm today, we saw this horizontal rainbow above the mountain!  I'm not exactly sure what it is, but after doing a bunch of searching online, have settled with Wikipedia's version of it: (See the entire article Here)


A circumhorizontal arc is an optical phenomenon - an ice-halo formed by the refraction of sun- or moonlight in plate-shaped ice crystals suspended in the atmosphere, typically in cirrus or cirrostratus clouds. In its full form, the arc has the appearance of a large, brightly spectrum-coloured band running parallel to the horizon, located below the Sun or Moon. The distance below the Sun or Moon is twice as far as the common 22-degree halo. Red is the uppermost colour. Often, when the halo-forming cloud is small or patchy, only fragments of the arc are seen. As with all halos, it can be caused by the Sun as well as (but much more rarely) by the Moon.[1] 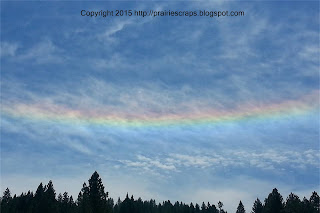 So, although the rainbow looks curved, it was straight across the sky and there is no sign of rain anywhere nearby (in fact, we are on the verge of having fire dangers in the area). It surely is a great sign today of "living blessed on the prairie!"
Please let me know if you have any better explanations for this, because it seems to be such a weird occurrence!
Posted by Prairie Scraps at 2:30 PM No comments:

Email ThisBlogThis!Share to TwitterShare to FacebookShare to Pinterest
Labels: Homeschool, Life on the Prairie 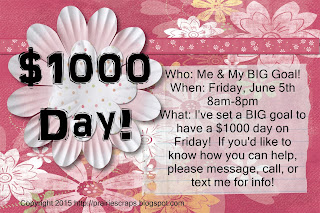