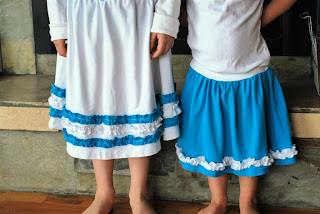 I was not sure what I was going to do for Easter dresses this year.  Last year I made These Pillowcase Dresses from my Scrap Stash, but this year, I just had no ideas.  I knew I didn't really have any large pieces of fabric, so I wasn't sure what I would do until I found this Tutorial at Sew Much Ado on Pinterest.   I have a ton of old t-shirts around that I can't bare to get rid of, but wasn't sure what I was going to do with them.  I grabbed two different ones and used the bottoms to make the skirts and the rest to make the ruffles. 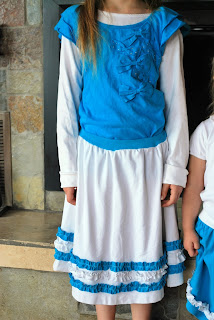 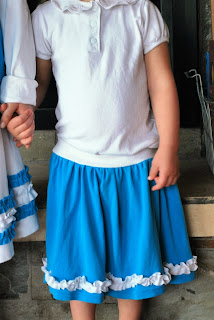 The girls are so excited to wear these, it was hard to convince them to wait until Easter!  I was so surprise to find the aqua shirt in my daughter's drawer that is a gift from Grandma from last year!  It matches perfectly. The best thing about these dresses, they were FREE!

We like to have coordinating outfits, so we can take a family picture together.  Everyone else is wearing tan, chocolate brown and white with a touch of aqua.  I made a scarf from the white and blue t-shirt for my older daughter, plus matching hair flowers!  I'll share soon.

Have a Happy Resurrection Day!
Posted by Prairie Scraps at 3:49 PM 7 comments:

One of the best thing about living here on the Camas Prairie, is that we are 15 minutes from the best fishing in the country on the South Fork and Clearwater Rivers!  Of course, best of all is the Steelhead and Salmon run that occurs twice a year.  One of these days, we will hook one of them but in the meantime, we will have a fun time trying to get one of those elusive Stealhead! 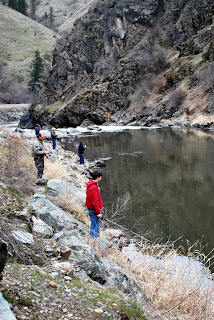 Oh, by the way, all those guys in the background were concerned that if one of our little ones hooked a stealhead, they will end up in the river, which looks peaceful, but has a roaring rapids in the background and is 15 feet deep in front of us.  Next time, my smaller children will for sure have life jackets, but two of us stayed with the two younger fishers at all times and watched like a hawk.  Of course, those guys don't understand that we have yet to hook one either! 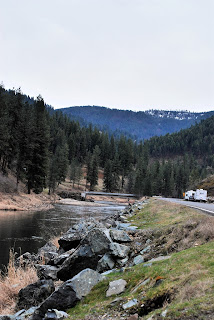 I had the kids packed up and ready in the car, the moment that Mr. Right got off of work and we got over an hour and a half of fishing time in last night.  It is usually at least 10 degrees warmer there, too, so it makes it even better to be out on the river. 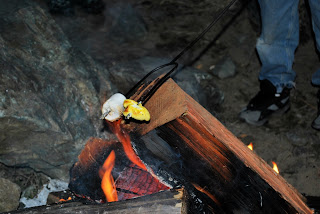 I knew that the little kids wouldn't tolerate that long fishing, so we brought some logs, a lighter, marshmallows, and some roasting sticks to sugar up and have some warmth as the sun sets!  Please note, Peeps are pretty wonderful roasted over the fire!  Buy them up when the go on clearance after Easter, because they don't seem to spoil either.  Even if they are a little hard, they roast up great!
Posted by Prairie Scraps at 7:53 AM 2 comments:

Email ThisBlogThis!Share to TwitterShare to FacebookShare to Pinterest
Labels: Healthy Living, Life on the Prairie

A very special 10-year-old friend of ours was having his 10th birthday last weekend.  He's had a recent fascination with cooking and baking, so I thought it would be fun to make him his own apron for a gift.  Of course, when he's not in the kitchen, he's in the wilderness camping, so I loved this fabric when I found it. (I would have used my scrap stash, but all I had for camouflage, was in Packer's green and yellow, which just isn't in high demand in Idaho.  I'll save that for another of my boys who love the Packers another time!)

I was originally looking for camouflage  but apparently in our area, camo is in high demand, because the only thing I could find was pink!  Not a good thing for a 10-year-old boy! 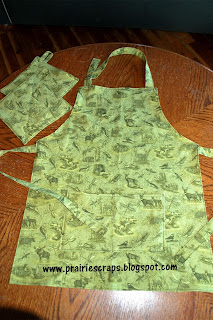 I have not tutorials or instructions for this one.  I literally laid the kid's apron I liked and had on hand on the material and cut it out about a 1/2 inch larger. 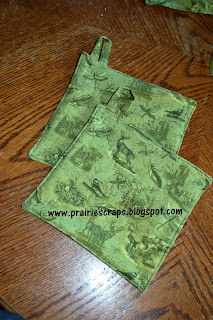 I was hoping to make a chef's hat, but I didn't have enough material from a yard to make one.  I came up with the brilliant idea to make a couple of potholders.  I used a towel for the pad inside.  Hopefully it will be thick enough not to burn precious hands.  Everything that I read on the internet said it would be just as good. 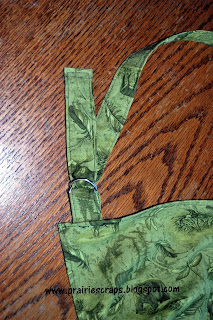 I did add this one extra, loops on the neck side, so he could adjust himself.  I got the idea from HERE.  She has a great tutorial for making an apron, too.  I used here directions for the neck strap.  I also planned on getting the Chef's Hat directions for Making It Fun. 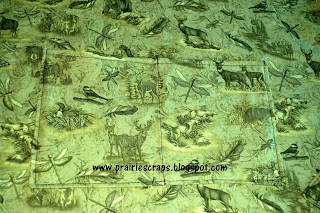 I added a double pocket on the front, too.  You can also check out that fabric, too.  Because it's the same color as camouflage green, from a distance, it looks camouflage.  Close up, it has the wildlife all over it.

I'll be sharing with the blogs in the right column.  Please leave me lots of love in the comments!  Thanks for stopping by!.
Posted by Prairie Scraps at 8:34 AM 6 comments:

It's my 100th Post!  What a great big reveal I have in store for you today! 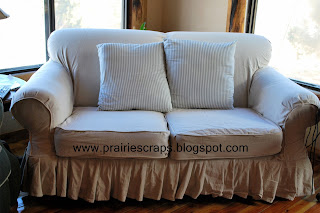 Three years ago, I found Miss Mustard Seeds' 6 part How to Make Slipcovers Series and started with watching the first video.  I ran out to Home Depot and purchased two drop clothes, washed and bleached them to get ready for making the slipcovers for my two couches, and there they sat folded nicely in my craft room!  A year ago, we moved across the country, so I packed those drop clothes up in a box, clearly marked them and put them on the truck.  When we arrived, I put them in front of all my other boxes to do first.  We even moved again over Christmas, and I moved that box again!  Then, I did a pillow re-do, HERE that pushed me over the edge.  I just had to tackle those slip covers!

I  had a Saturday, where the guys were doing guy things and it was me and the girls home, so I watched all 6 videos!  Yes, I did, from start to finish.  This was hard for me, I really wanted to start, without finding out the end result, but I persevered.  And then I started this overwhelming projecting.
I worked on cutting it out all Saturday morning and making the piping.  I thought I had made more than enough piping, but in the end, I was short piping for the cushions.  Live and learn, I guess!  In the afternoon, a friend reminded me that the movie theater was showing Madagascar 3 for only $3 each, so we went on a whim.  I didn't even worry about the couch!  Aren't I good?

I actually thought I would run out of pins to put the skirt around the couch.  It was close, but I was able to freely pin the entire thing on.  I worked all Saturday evening on the couch and then on Sunday evening also.   In the meantime, my entire living room was overtaken with this project.  Not a complaint could be heard in the house!  I have a great family!

I have to tell you at this point, I had to figure out what to do with the pillows.  I had thought I could get the entire love seat out of less than one drop cloth and then the big one out of another, so was surprised that I ran out of material to make the cushions.  I had to cut into that second drop cloth.

I also have to confess, that I actually started to think in my mind that it would be OK to leave the cushions without covers!  I could be done!  But, one look at that raggedy piping on the cushions, told me I should have covered them a long time ago.

I gave myself until Tuesday to get this done, and in a couple of hours, was able to cut, make piping and finish my couch.  Overall, this project wasn't worth my worry and putting off for 3 years!  I should have just done it!

So here is where the entire project becomes a lot of pictures.  I always want to see all the angles that people do for their projects, so here they are:

It was such a big decision about weather to use a zipper or make a pocket enclosure.  Frankly, I'll never get to the store to buy the zipper for it.  So I decided better to have a cover than to be frozen and not finish the cover.  It is hard to get the cushion in, but Mr. Right has gotten good at folding the cushion up to get it in.  I'm over the dilemma  because I now love my couch!  I am hoping this will extend my couch life for a long time, to get the kids through getting out of the house, and then I can get new ones again.  (16 years and counting - I'm not sure it's realistic!)

Now, I have to buy more drop cloths to finish the big couch, but I also really need to give myself a break for a bit before tackling it.  I am determined to finish this as soon as I can get the drop cloths, and not wait another three years!  I promise.  Please leave your comments!  I love to hear what you think and will be sharing with those blogs on the right column.  Be sure to check out Miss Mustard Seed's Entire site because she is the very best!  Thank you Miss Mustard Seed!!
Posted by Prairie Scraps at 8:32 AM 14 comments: