Nobody wants to hear about your workout! 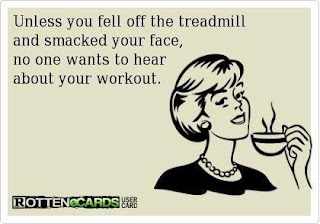 One of my friends posted a video of herself, 9 months pregnant, doing heavy duty exercise with her belly sticking out below her tank and leggings on. Let me tell you, there are some things that one can not unsee in your mind!! Nothing about her belly flopping around looked healthy or appealing!  I'm not even saying that being pregnant makes you look fat, but this was not a great example of healthy looking pregnancy!   There was literally a roll of belly flab slapping around under her pregnant belly.  Gross!!

Another friend recently posted a before and after picture of her supposed weight loss.  I've looked at it for a long time, but I can't see the difference.  If you are going to expose yourself and put up a picture of yourself in your bra, you better be really sure that everyone can tell the difference.  I actually thought she looked better in the first picture, because her face looked healthy.

Don't get me wrong, I myself am  Healthy Meal Replacements (shameless plug!) and of course, am very excited about the results and want all my friends and family to join me in my quest to get healthy.  But I not to post constant "selling" posts on Facebook and other social media about my products along with horrible pictures of myself.

I've lost 35 pounds and you can tell that I have, I only share my before and after pictures with friends I'm actually having a private conversation with about it and they ask me!  I never share pictures of my unclad body, though.   I definitely don't share videos of myself exercising, pregnant or otherwise, because nobody wants to see that! I take pictures before and after shots with modest apparel on, so you can get the idea, without having a bad experience in your mind!

Dear Weight Loss Enthusiast Friends - Please don't share your exercise and weight loss pictures constantly on your feeds!  Nobody is that interested in it!  Thank you, kindly!

Posted by Prairie Scraps at 7:45 AM No comments:

I've been really praying about and contemplating this post for some time.  Every time I see a post on Facebook by one of my friends that says, I'm going through and cleaning out my friends on Facebook or "You've made the cut!", I have two knee-jerk reactions.  First, I think, "boy, am I going to make it?"  and the second reaction I have is "do I want to be friends with someone who actually would cut someone from their friends list?" 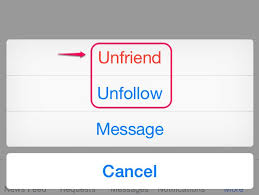 Really, that's what I think. Look, don't accept a friendship on Facebook that you don't plan on keeping for your entire life - yes, the rest of your life!  Although the person doesn't get a notification that they are unfriended, it usually doesn't take them long to figure out what you've done. Either they see a comment on another friends page, or an event on another's page, or you are in a group together, or something will red flag your dirty deed.

I always tell my hostesses that it's better to invite everyone, because rarely is someone offended to be invited to your party, but if they hear that there's a party and they didn't get invited, they will be offended.  This same principle can be applied here.  If you plan to ever have any sort of relationship with that person again, DO NOT UNFRIEND THEM!

I recently had two "friends" decide to make a statement (and frankly, be bratty) and unfriended me because they felt I wasn't a friend a "real life."  Well, when one of those girls contacted me to "talk about some things," I had no interest.   Someone who unfriends another, really has no interest in any sort of friendship with me.  She sent a very clear message, publicly, mind you that she didn't want to be friends with me anymore.  If she thinks I want to be best buds again, forget it.  I have no interest in games, or in people who don't work things out in person, first. She should have worked out those things before she unfriended me.

When you unfriend another these are the statements you are making:
At the end of the day, I choose to follow Christ's command "to love one another."  You can't love another by unfriending them.  Maybe you don't agree with everything someone posts, or shares on Facebook, but isn't that true love, to stay "friends" with them?  I know that many of the 500+ friends I have on Facebook, don't have my same beliefs or views, but I pray and hope that something in my life touches them to see Christ's love.  I can put up with a few and often a lot of posts on political angles I don't agree with, rather than "unfriend" someone. 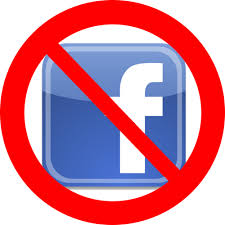 Don't get me wrong, you should never friend someone that is unsafe or will harm you or your family.  Here are some of the ways I handle difficult people without unfriending them:
On another thought, what do you say to someone when you run into them in person?  "Oh, hi, unfriend, how are you doing? I see you don't want to be friends on Facebook anymore, but hey, lets get together for coffee?"  I don't know what people are thinking when they unfriend someone in the same town, especially a small town.  It's extremely awkward!

Posted by Prairie Scraps at 7:50 AM No comments: 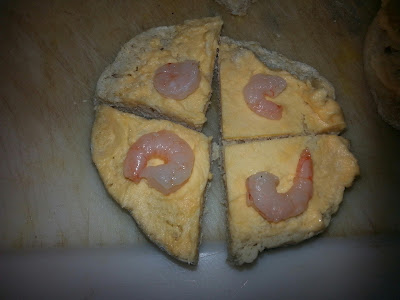 Years ago, my aunt had the most tasty and easiest appetizer at a Family Thanksgiving Dinner.  We have since adopted this recipe for ourselves, and I thought that I would share it with you. It is so easy, and in fact, is made ahead and put in the freezer!  I love things that you can make way ahead of time!  Just be prepared for them disappearing as soon as you take them out of the oven! 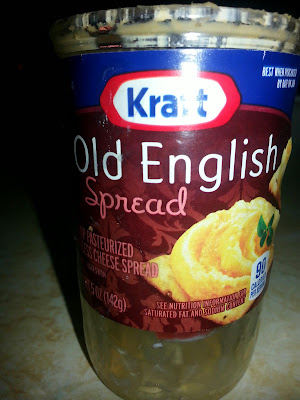 The strangest ingredient in the recipe is Old English Spread!  This is a tiny jar, usually found in the processed cheese section, way on top.  And this little jar is usually about $4, which is the part that kills me.  I actually saw some the other day on clearance for $2 and thought about stocking up, but decided that it was on clearance because it was already old, and it would be awhile before I used it. 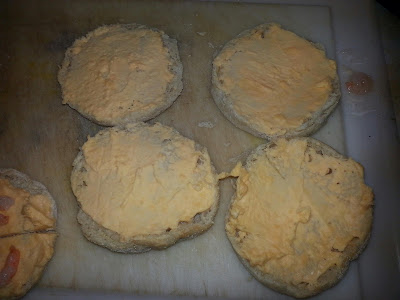 Mix the stick of butter and cheese spread together.  Spread this mixture onto each half of the English muffins until gone. Slice each English Muffin half into quarters.
Place quarters onto a cookie sheet and freeze.  When they are frozen, you can put them into a Ziploc bag for later use.
When ready to have appetizers, place quarters onto a cookie sheet and bake in a preheated 350 degree oven for about 10 minutes, or until the cheese and butter is melted.  Serve!
Posted by Prairie Scraps at 6:01 AM No comments: